I am a web developer who works at George Mason University. I love anything Web related, new technologies, all things nerdy, coffee roasting, homebrewing and things dealing with statistics and data. I also co-founded and help run the best meetup group around, Arlington Ruby!

tl;dr- It was amazing experience and everyone should attend Rubyconf AU.

I recently had the opportunity to attend and speak at Rubyconf Australia and the experience has left me humbled. I have been fortunate enough to have attended several conferences in the past few years and I can unequivocally say that this was the best experience I have ever had at a conference. The organizers considered every contingency and put together an amazing experience.

While I have been at conferences where someone or some company has organized a get together the night before the conference this was the first time I attended one organized by the conference itself. It was here at the opening party that I understood that this was going to be a different kind of conference. I had the opportunity to watch as people arrived and they were greeted by other rubyists like old friends. The number of hugs, smiles and handshakes I witnessed were too numerous to count. Hearing people ask how things were in Sydney, Brisbane, Adelaide, Canberra and other places with strange and funny names that I assumed were cities added to the sense that this was more a gathering of friends who were happy to once again have the opportunity to see each other than attendees at a conference.

The venue was absolutely amazing. It was aesthetically pleasing and extremely functional in design. 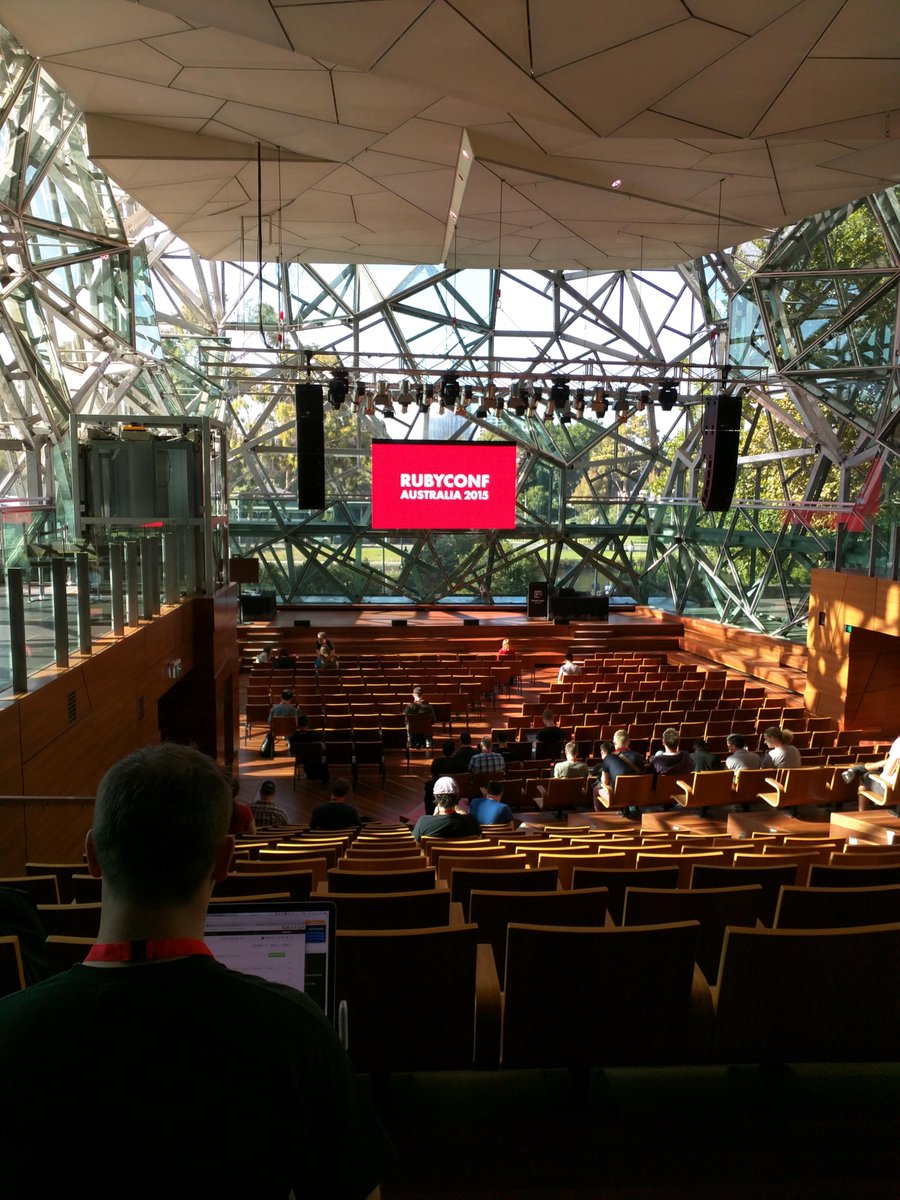 The talks, both in terms of quality and content, were astounding. I was extremely intimidated to learn that I’d be speaking after one of my ruby heroes, Tom Stuart. I spoke to Tom before his talk and I was surprised (and possibly relieved) to see that even he gets nervous before he gives a talk. Not that he had any reason to, his talk was amazing. To be completely fair, I probably didn’t pay full attention as I was going to be speaking after him and was consumed with stress about that fact.

My talk seemed to go over well and I received good feedback and comments on it. It is hard not to have doubts though as the main gist of my talk is was that we should endeavour to do more good in the world and help our communities and with a topic like that it is hard so I feel that it hard to be critical/negative of it.

The talks, at 20 minutes in length, were the ideal length. It gave the speakers enough time to get the point of what they were saying across then with the large breaks between talks there was ample time to follow up with speakers individually with any questions you may have. I would definitely like to see this format picked up by other conferences because it is great to have time to speak, network, and socialize with your other attendees who may have other commitments that prevent them from coming to afterparties.

The organized events were fantastic. From amazing dumpllings to thai food to some of the most delicious gelatto I have ever eaten. The events had enough people that you were never lacking in a conversation partner but not too many that you weren’t able to learn the names of everyone there. The atmosphere at all of the events was what you would expect from a gathering of rubyists, friendly and welcoming.

I can’t say enough good things about the organizers and the great job they did. Suffice it to say, if they had a fan club, I would definitely be the president.

I was able to take my picture with all of them and you can see from the pictures what happy people they are. Here are the pictures (in alphabetical order): While not technically an organizer I feel that I need to recognize the city of Melbourne itself. Melbourne provided the perfect background for the conference and I am extremely happy I had a few extra days to explore the city. The first impression of Melbourne I had was that it was this modern metropolis but if you are able to make it out of the city center to places like Richmond and Port Melbourne you are able to see that Melbourne is built on a strong foundation. Brick buildings with faded paint show that there is a long history that you do not need to dip too far from the surface to see.

I may be biased but I loved everything about Melbourne and to me it felt like a San Francisco that I would want to live in. There was an amazing energy to the city, the food was amazing and most importantly the coffeeshops were fantastic. I think you could spend a lifetime appreciating the street paintings and architecture of Melbourne.

Note: I recognize there were a ton of amazing people who helped make the event amazing… video people, tshirt volunteers, travel coordinators and more! Even though I made an effort to try and thank and hug them all I probably missed a few!

After an amazing trip to the zoo we gathered for the final events of the conference, a picnic and after party. At the picnic I saw some friends I had made at RailsCamp NZ playing a strange game with metal balls. It turned out to be something called Petanque which they taught me the rules of and invited me into their game. Despite being terrible it was a lot of fun. Since returning home, I have purchased a petanque set of my own so I won’t embarass myself so badly next time.

From the picnic we headed to a lawn bowling club for the afterparty. I was taught how to lawn bowl and was surprised at how similar, in terms of play and strategy, it is to curling in Canada. I can only assume the Australians stole the idea from us and since they don’t have 8 months of winter they adapted it to work in their beautiful climate.

As the picnic and afterparty winded down there was a bittersweet feeling in the air. To lean heavily on my favourite Emily Dickenson quote, “Parting is all we know of heaven, and all we need of hell” my interpretation of the quote was never more painfully obvious. The heaven relates to the conference friends (attendees is too impersonal a word) acting their best and treasuring their remaining time with each other, while the hell is the knowing that they would soon be parting ways.

This event, more than anything else was about community and the community in Melbourne is fantastic. If anyone ever has the opportunity to attend, you should jump at it.